From 21-23 July 2018 the workshop Technology Revolution and Public Administration took place in Guagzhou, China. This workshop was sponsored by a grant from the Eurasia-Pacific Uninet (EPU). Researchers from the Centre for E-Governance at Danube University Krems and the Department of Media and Communication at City University Hong Kong took part. It was hosted by the Sun Yat-Sen University in Guangzhou. 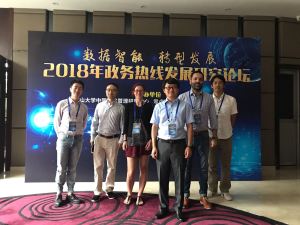 Participants of the EPU Meeting in the afternoon

The first session addressed aspects of governmental innovation, e-governance and digital and mobile governance. A particular emphasis was on governmental hotlines and artificial intelligence as well as accessibility of hotlines, f.i. through the usage of languages (50 different languages can be selected in New York, for instance). Examples from New York also included open data contests (Big Apps 3.0) and open data principles. It is interesting that Big Data was called a “tiger flying” – hinting at the different techno-positive metaphors of datafication that seem to be found for this phenomenon around the world. The governmental hotline in Guangzhou is called 12345 and a few presentations were held around this topic.

The second session of the workshop addressed aspects of political participation, civic engagement and social media in a global and Asian context. The following presentations were held:

It became apparent that political participation es evaluated differently in different Austrian societies (people socially distance themselves more from people who who participate in protests in countries like China and Japan for instance) and and that relating civic engagement to specific media stays difficult, due to the dynamic nature of social media and different usage patterns around the world (for instance, Americans still use more texting compared to instant messaging apps). Regarding governmental responsiveness, the influence of current events is strong, and results differ according to different governmental domains. When it comes to health advocacy in a digitally networked environment, social media can offer a place for the creation of alternative illness narratives and practices, and patients often choose between competing narratives that promote or contest classic medical paradigms.

Participants enjoyed a networking dinner with the hosts afterwards.